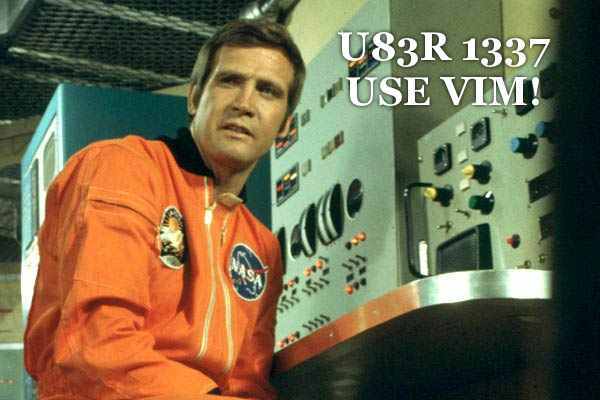 tl;dr: You want to teach yourself vim (the best text editor known to human kind) in the fastest way possible. This is my way of doing it. You start by learning the minimal to survive, then you integrate all the tricks slowly.

Learn vim and it will be your last text editor. There isn’t any better text editor that I know of. It is hard to learn, but incredible to use.

I suggest you teach yourself Vim in 4 steps:

By the end of this journey, you’ll become a vim superstar.

But before we start, just a warning. Learning vim will be painful at first. It will take time. It will be a lot like playing a musical instrument. Don’t expect to be more efficient with vim than with another editor in less than 3 days. In fact it will certainly take 2 weeks instead of 3 days.

In a standard editor, typing on the keyboard is enough to write something and see it on the screen. Not this time. Vim is in Normal mode. Let’s go to Insert mode. Type the letter i.

You should feel a bit better. You can type letters like in a standard editor. To get back to Normal mode just press the ESC key.

You now know how to switch between Insert and Normal mode. And now, here are the commands that you need in order to survive in Normal mode:

Only 5 commands. That is all you need to get started. Once these command start to become natural (maybe after a day or so), you should move on to level 2.

But first, just a little remark about Normal mode. In standard editors, to copy you have to use the Ctrl key (Ctrl-c generally). In fact, when you press Ctrl, it is as if all of your keys change meaning. Using vim in normal mode is a bit like having the editor automatically press the Ctrl key for you.

A last word about notations:

You know the commands required for survival. It’s time to learn a few more commands. These are my suggestions:

Take the time to learn all of these command. Once done, you should be able to do every thing you are able to do in other editors. You may still feel a bit awkward. But follow me to the next level and you’ll see why vim is worth the extra work.

Congratulation for reaching this far! Now we can start with the interesting stuff. At level 3, we’ll only talk about commands which are compatible with the old vi editor.

Let’s look at how vim could help you to repeat yourself:

Some examples, open a file and type:

Knowing how to move efficiently with vim is very important. Don’t skip this section.

Believe me, the last three commands are gold.

Remember about the importance of vi moves? Here is the reason. Most commands can be used using the following general format:

We also can do things like ye, yank from here to the end of the word. But also y2/foo yank up to the second occurrence of “foo”.

With all preceding commands you should be comfortable using vim. But now, here are the killer features. Some of these features were the reason I started to use vim.

A useful tip is: dt" → remove everything until the ".

These command can only be used after an operator in visual mode. But they are very powerful. Their main pattern is:

Note: in Windows you might have to use <C-q> instead of <C-v> if your clipboard is not empty.

In Insert mode, just type the start of a word, then type <C-p>, magic…

On a line containing only the number 1, type this:

We saw an example with <C-v>. There is also v and V. Once the selection has been made, you can:

Add something at the end of all visually selected lines:

These are the most important commands, but you should look at :help split.

That was 90% of the commands I use every day. I suggest that you learn no more than one or two new commands per day. After two to three weeks you’ll start to feel the power of vim in your hands.

Learning Vim is more a matter of training than plain memorization. Fortunately vim comes with some very good tools and excellent documentation. Run vimtutor until you are familiar with most basic commands. Also, you should read this page carefully: :help usr_02.txt.

Then, you will learn about !, folds, registers, plugins and many other features. Learn vim like you’d learn piano and all should be fine.

If you liked this article, there is a follow up: Vim as IDE